In this article you’re going to get a basic understanding of the next step in the evolution of Docker: Kubernetes.

Since adding installation instructions for each particular OS would make this article extremely long, I’m going to try and point you in the right direction.

There are three main things you need, kubectl (read as cube-c-t-l), minikube, and depending on your OS and version you’ll either need to enable HyperV for some versions of Windows 10 or install VirtualBox for most other systems.

If everything went well you should be able to go into the terminal and type kubectl get pods and get one running result.

↓ Here's a great Node course we recommend. Plus, this affiliate banner helps support the site 🙏

Kubernetes, which you’ll often see shortened to k8s, is a more advanced system for managing multi-container based apps meant to allow for multiple instances of a container to be created or destroyed to match a workload.

Imagine you have an app that takes an image, performs some operation on it like compression or converting to greyscale, and returns it to the user. The app is split into four separate containers: NGINX, server, client, and the image processor.

Now that 10 people are using the app the service hosting our containers, like AWS, will handle this by duplicating our entire set of containers. Doesn’t that seem a bit wasteful, why create a new NGINX container per visiter? Because while having a single NGINX container would be much more resourceful we would still need different instances of the image processor, since 100 or 1,000 users waiting on that one container to finish would be horrible. 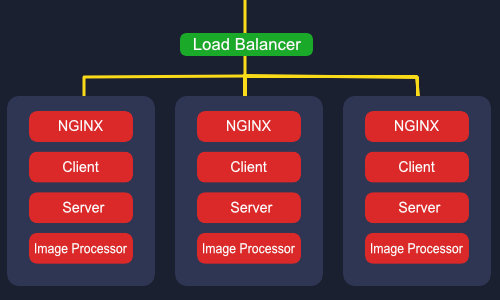 Kubernetes allows us to take a much more resourceful approach by having each containerized part of our app be able to generate as many needed containers for our workload. 50 users start uploading images and 50 image processor and client containers are generated inside their pod while there remains a single server and NGINX containers. When the job is done and the users have left, any unnecessary containers are destroyed. This a vast oversimplification, but our goal is to have something that looks a bit more like this. 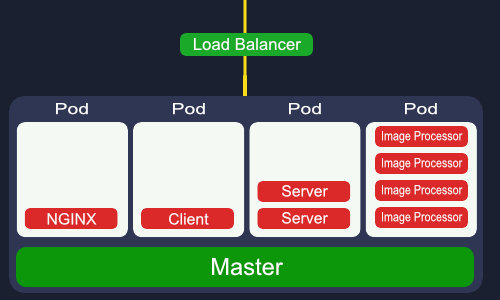 As requests come in we have a master that tells pods what to do and redirects the load appropriately.

While there are quite a few objects you’ll have available to you, there are three main ones you have to worry about:

How We Work with Kubernetes

A lot of what you’re going to be doing with Kubernetes will be in setting up the configuration. We’re going to be creating yaml files for each object we want to work with. The goal of each of these is to pull your existing images on DockerHub, add any necessary metadata, and set up its relationships to other objects. Unlike the simplicity of working with Docker Compose, the networking can be a bit more involved.

Amid the swarm of verbose and vague descriptions of what Kubernetes is and does that are floating around out there, I hope this was a gentle-enough introduction to something that, at least for me, can quickly become overwhelming especially when you’re new to DevOps.

How To: Publishing Your First Package to npm