Despite having worked with Vue.js on countless projects, and having learned the ins-and-outs of various parts of it, for some reason understanding the transition system has always left me confused. Hopefully this article can help shed some light on what is actually a fairly intuitive system.

For the sake of sticking with the basics, we'll mostly be focusing on using CSS Transitions with Vue, but Vue also supports using CSS Animations or plain JavaScript transitions. We'll also ignore transition groups and event hooks for now.

If you're interested in learning Vue in a comprehensive and structured way, I highly recommend you try The Vue.js Master Class course by Vue School. Learning from a premium resource like that is a serious investment in yourself.

Plus, this is an affiliate link, so if you purchase the course you help Alligator.io continue to exist at the same time! 🙏

So basically, Vue works by adding and removing classes on components / elements during the transition process. There are six different classes for you to worry about, but thankfully, once you get the basic idea down, it all starts to make sense…

So what do we use these classes for?

These honestly confused me the longest, but they’re actually really simple to understand.

Use these classes to define which properties to transition and the duration and timing functions for them. That’s it.

Before Vue 2.1.8, you had to use this class to define the ending state of the transition as well, which complicated things.

Not too shabby. Now we just need to define how it starts and ends.

So, let’s have the slither transition start with a transform that’s way off to the left, then move to the normal position:

Now, usually, you want the leave transition to simply be the inverse of the enter transition. To do that, we simply add the opposite leave classes to the enter classes:

If you’re writing different transitions for entering and leaving, you can separate the classes however you’d like.

Putting it all together, you get this:

This will cause the alligator component to slide in from the left, and if you set alligatorDefinition to a falsey value, if will slide out to the left over three seconds.

The important things to remember are:

If that’s still confusing, here’s an image (courtesy of the Vue.js official docs) that might clear things up a bit. 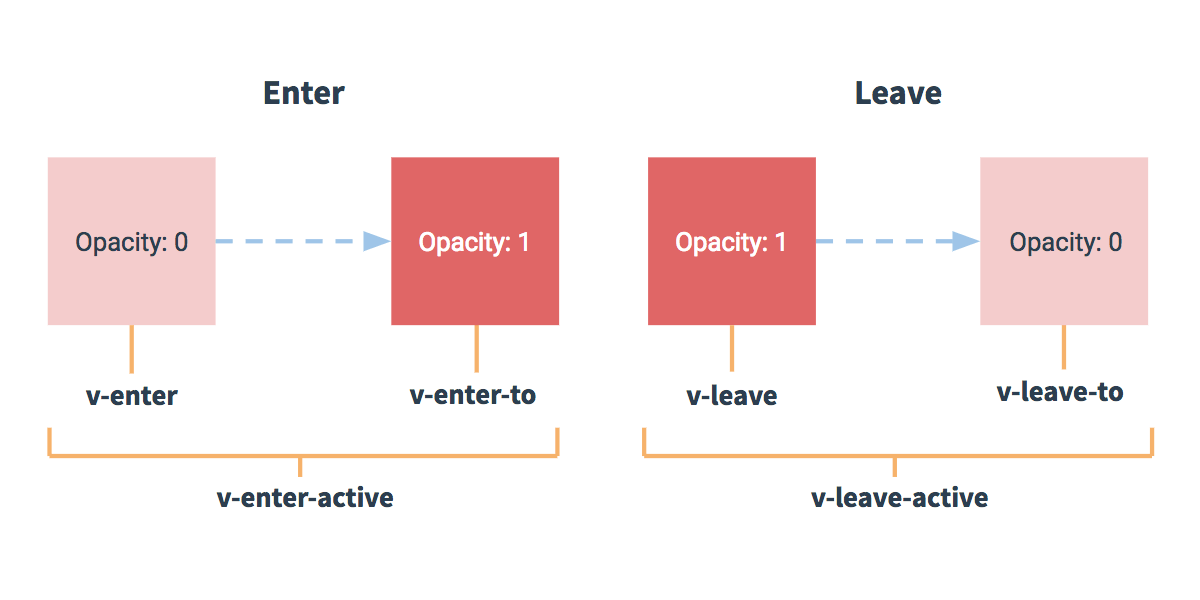 There’s plenty more to learn about transitions, it would be a good idea to take a look at the official docs for more information.