Previously, when the JavaScript language just became popular, nobody would have imagined that developers could use tools like Gulp, Browserify or webpack. However, the scope of projects has raised and such aspects as developer productivity, app performance and security is becoming more and more important.

Nowadays, workflow automation tools like Gulp or Grunt are vital for every project that requires web application development. These tools can assist in improving software engineer productivity. Additionally, they are able to automate routine operations such as CSS preprocessing, image compression, etc. And webpack is great for bundling various files together into a dependency graph.

So, let’s discuss what automation tool you need to utilize: Gulp, Grint, webpack or Browserify.

There are a lot of routine tasks that every front-end developer has to tackle. Of course, software builders tend to automate the workflow to save time. There are several operations that software engineers do every day. 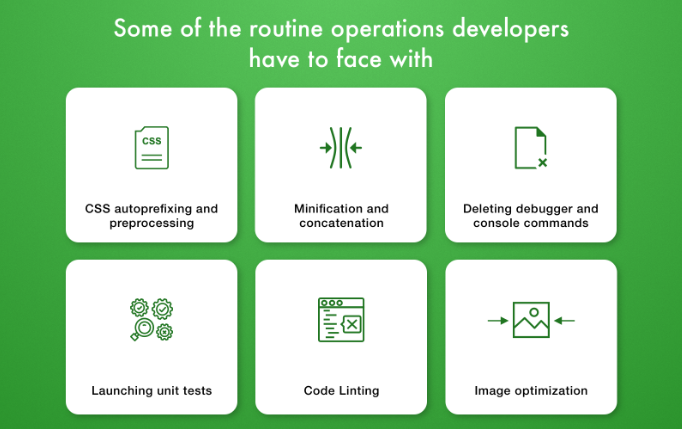 As you can see, these tasks are not complicated but require much time and energy. With the help of workflow tools like Gulp, all these tasks can be automated. However, they are not obligatory for development, their main aim is to simplify a software engineer’s work and improve productivity. Additionally, such tools can decrease the number of human mistakes.

There are many plugins available for every tool and, as a result, they may provide a lot of capabilities. For example, these tools are able to change attributes of XML files, cooperate with file renaming, and so on.

Both of them can help you monitor files just added or modifications to existing files in specific directories. Furthermore, they give an opportunity to create tasks to process those files. However, there are a few important differences between Gulp and Grunt.

The greatest difference between these task runners is in their internal functions: 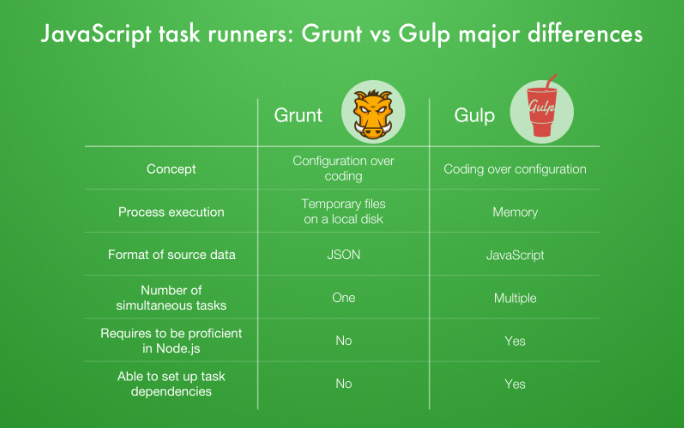 Gulp coding vs writing a configuration for Grunt

The main purpose of plugins for Gulp is to fulfill a single objective as well as code to perform what you need. As a result, creating custom extensions for Gulp is much simpler. Moreover, the Gulp code looks more readable. On the other hand, in order to use Gulp, you need to have some knowledge of Node.js streams.

Grunt is more about configuration than coding and its plugins can perform several tasks. Configuring Grunt plugins can take a little more time, but due to the user-friendly interface, the process is comfortable and easy. As a result, you just need to choose the tool that fits your requirements better.

Moreover, if you’ve already worked with one of these tools, you can speed up the development process using your previous experience.

During development, Gulp’s creators have decided to utilize a completely different logic than Grunt. Gulp was created based on an asynchronous approach which gives an opportunity to process a lot of files independently. On the other hand, Grunt can run only one operation at a time.

TMWtech has done a test that compares the time required to compile a Sass file for both Gulp and Grunt. The results show us that Grunt had needed almost twice more time that Gulp (2.3 vs 1.3 sec). So, if speed is a vital factor then, of course, you need to choose Gulp. However, working on a small project, you won’t notice the difference.

If you work on a large project with a lot of tasks that need automation, it’s better speed-wise to use Gulp. In this case, the difference in time can influence your tooling decision.

Module bundlers allow combining static assets to reduce HTTP requests and optimize performance. There are a few popular module bundlers these days, with webpack and Browserify being two of them. Parcel would be another one. Let’s go over them in more detail.

The people behind Browserify built it as a simple tool that provides an opportunity to run Node.js code in the browser. Furthermore, it can combine different modules into one file. However, it’s necessary to compile the code to check the results in browsers.

Browserify is a pure module bundler and, as a result, it lacks the task runner features. So, you need to consider utilizing such tools as Gulp and Grunt in addition to Browserify. The drawback here is the necessity to configure it for each project. On the other hand, there is a large base of Browserify transforms, so you can add necessary functions.

webpack is increasingly popular because a lot of framework use webpack out of the box. There is a population of search queries for each of these automatic tools. As you can see, webpack was growing from 2015 to 2017. After April 2017, webpack became more widespread than Grunt and Gulp, so their popularity started to decrease. 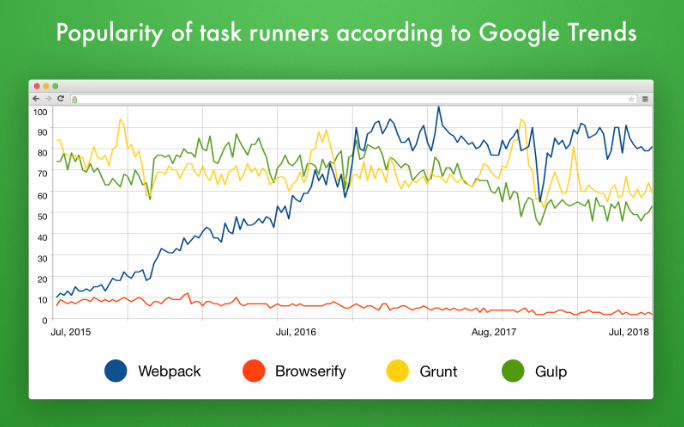 There are more actions that this bundler manager can do:

In the past, you’ve needed to use several tools to automate the development process, e.g. Browserify + Gulp or Grunt + a lot of plugins. webpack is powerful enough to do what all these tools combined can do. As a result, you don’t need Gulp or Grunt in addition. Furthermore, webpack really shows its potential when it comes to working with non-code files like CSS and images. You can just import them as you would for JavaScript files by using the usual require function or ES6 module syntax.

webpack is also able to use provide hot module reloading, which gives you an opportunity to re-render your app in a browser faster. Of course, Browsery also supports this function, but webpack has a better hang of it.

Gulp vs Grunt vs webpack vs Browserify

It’s obvious that webpack is the most popular tool for JavaScript app development. As you can see, it has 53.4K Github stars (at the time of this writing), which highlight how popular it has become for developers.

Browserify is older that webpack but a strong point is the frequent updates.

Gulp has much less open pull requests and issues, it’s at a very stable place. 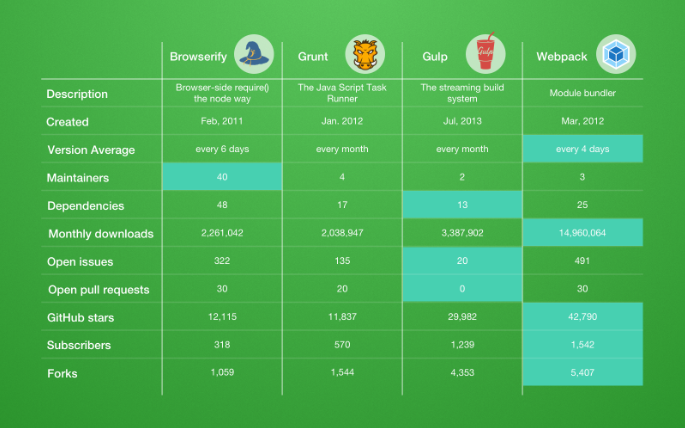 The main difference between these workflows is that Browserify needs the help of Gulp or Grunt while webpack already has all the important features available. However, Browserify is much easier to learn and utilize.

Also, using Gulp/Grunt + Browserify, you can separate tasks and, as a result, get more comprehensible build. Browserify offers an extensive plugin base that allows doing everything you want.

However, if you want to save time and use only one workflow automation tool, webpack is the best option in my opinion. Its biggest advantage is that you don’t need to configure everything from scratch. You just have to set up some details and then get a good ready-made build. According to my experience, utilizing webpack takes approximately half a time compared to using Gulp.

Wrapping up this article, with choosing a technology stack for web apps you need to consider tools to automate routine tasks. webpack is one of the best automation workflow tools and its popularity is constantly growing. It’s happened because this tool combines the features of both task runner and module bundler. Of course, you can always use Gulp/Grunt + Browserify during JavaScript development. The only important thing is how well you know the tools and your personal preferences.