In this article, we will learn how to make a React Native application with Expo and create-react-native-app and learn about some of the differences between React and React Native code and file structure.

Thinking about making a phone app? Know React and would rather not spend valuable time learning another language? Well, excellent news! React Native is here to save us that time. It also gives us easy access to the phone’s API so we can tap into a phone’s contacts, notifications, camera, and even the gyroscope!

If you're interested in learning React in a comprehensive and structured way, I highly recommend you try Wes Bos' React for Beginners or Fullstack Advanced React & GraphQL course. Learning from a premium course like that is a serious investment in yourself.

If you are looking for the quickest way to “Get Started” with React Native, then look no further than Facebook’s own Getting Started Guide.

Then we create our first project:

Once we run npm start, we can look at the output from the command line for more details on how we can run the app in a simulator or install the Expo app on our phone and run it there.

Then the code starting from the generated app itself tells us what to do next:

Okay, we have “hello world”ed, but where do we go from here? First, let’s change our app to have only one Text field:

Notice that this change will immediately update our simulator or phone. We may have seen hot reloading for a React web project, but how do we get it for a native app? If we run the npm start command inside a create-react-native-app project, we’ll see something like:

Notice that Expo is just running a web server on port 19000, much like a web app might run on http://192.168.1.171:80. This is one way that Expo makes the learning curve from React.js into React Native much smoother. But what exactly is Expo?

According to the Expo team:

Expo is a free and open source toolchain built around React Native to help you build native iOS and Android projects using JavaScript and React.

So basically, we can get the best of both worlds.

As we continue to develop, we may run into Expo’s limitations. Namely, it currently does not support Bluetooth integration or any third party plugins that are built with native iOS or Android code. All third-party tools in an Expo project must have been built in the Expo environment.

But don’t fret! If we reach one of these limitations, Expo comes with the following command:

Ejecting will convert our project into a “pure” React Native project, meaning every time the project is built from now on, it is converted into iOS (Objective C) and/or Android (Java) code. This allows us to get around the limitations of Expo mentioned above, but can make testing and deployment considerably harder. That is, no more auto-generated QR codes or links.

Note that ejecting is a permanent action, so it is a good idea for us to do two things:

Let’s dive deeper into the React Native code created for us with create-react-native-app and how it differs from React.js code.

If we look in the directory created by create-react-native-app, we see the following files: 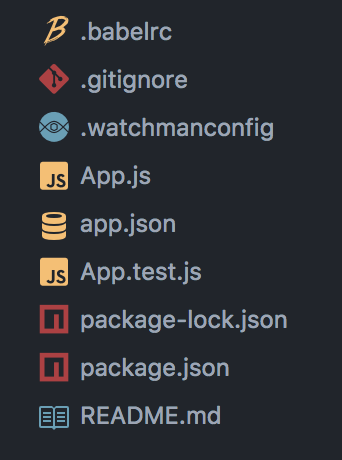 After our update, our code should look like this:

Looking at our app, we see a lot of code that is similar to React.js. From top to bottom, we see:

So far, so good. But there are also some new things:

In a nutshell, these two major differences illustrate the crux of React.js vs React Native code confusion.

For example, if we are used to this from React.js:

Also we have to import that Image component from React Native. Not incredibly different, but when we’re switching between React.js and React Native, those subtle differences can lead to some frustrating errors.

There is a third difference that will appear once our apps get more complex: many of the npm packages we import for React.js will not work with React Native. If we are using a pure Javascript npm package we can use it both in React.js and React Native, but once we involve HTML or CSS (e.g. reactstrap or any form validation libraries) we will need to look for a React-Native-compatible alternative.

Expo and create-react-native-app allow us to utilize a React Native development environment that is very similar to React.js, but also allow us to take advantage of native mobile device features.

In a nutshell, the three main differences between React.js and React Native are:

With React Native, we have to sacrifice some of our comfortable tools from pure web development, but there are some powerful tools we get in exchange which make the move to React Native well worth it.

Stay tuned for more Alligator.io articles on putting our app in the App Store, adding native camera integration, connecting to a phone’s contacts, and push notifications.